It was senior day in Louisville, Ky, and the Cardinals took on the NC State Wolfpack. In their final home game of the regular season, Louisville was able to get back to their winning ways after falling at Clemson the previous week, using a gritty defensive performance to win 25-10.

This was one of the most well-rounded games that Louisville has played all season long. This came on the heels of suffering their first loss in over a month and having their rivalry matchup against Kentucky waiting immediately after.

For NC State, first-year quarterback M.J. Morris missed the game with a knee injury. He was joined on the sidelines by linebacker Payton Wilson and center Grant Gibson among other injured notables. It was a defensive battle in the first quarter, with both teams struggling to move the ball.

Louisville got a 38-yard pass from Brock Domann to Marshon Ford to set up the Cardinals from the NC State 12 in the second quarter, but the Pack stopped them on three straight plays and forced an FG to make it a 3-0 lead with 9:33 left. Ben Finley had three incomplete passes and almost threw an interception on the next drive. The running powered them through for a Chris Dunn field goal. Louisville’s Jawhar Jordan made a big play on kickoff, veering back across the field and motoring 98 yards for a touchdown. This play broke the game open.

Ben Finley. The third-year quarterback, fourth on the depth chart until Devin Leary’s injury in October, did not start the game. With Morris out with a lower-body injury, Jack Chambers took over as the starter, and Finley gave the offense some life in the second half. Finley’s 34-yard scoring pass to running back Michael Allen on a wheel route down the left sideline in the third quarter pulled the Wolfpack within 13-10. It was the second TD pass of Finley’s career and the first since the UNC game in the 2020 season.

The Pack took its chances in the second half. Trailing 16-10 in the fourth quarter, the Wolfpack gambled on a fourth-down play and lost. On fourth-and-1 at the NCSU 45, Allen was stopped for no gain. Louisville’s defense danced off the field, and those left in the shivering crowd thundered their approval. Domann had his second career start and completed 12 of 25 passes for 153 yards. In addition to his touchdown return, Jordan rushed for 105 yards and a TD on 16 carries for the Cardinals.

“I’m proud of our seniors, the guys that played their last game– to send them off on a high note like this, they’ll remember it forever.” UofL head coach Scott Satterfield said. “I still remember my game back in 1995, my last game was a long time ago. They’ll remember this game forever. And so, I wanted it to be a good memory, and it was.” 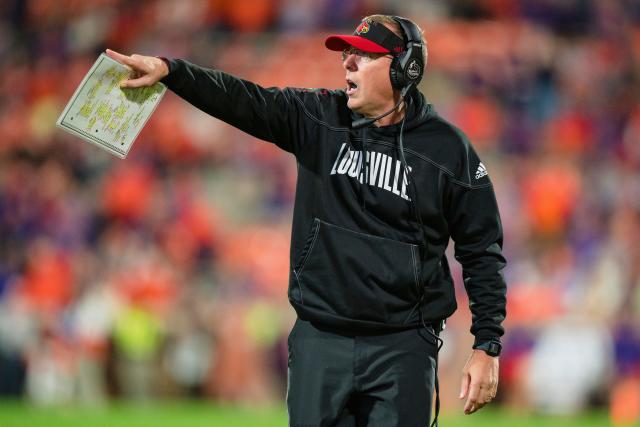 Louisville has won 5 out of their last 6 games. Scott Satterfield have fought through rumors of being fired this year, but the turnaround has saved them. With two top 25 wins and a top 25 recruiting class next year, Satterfield may finally have the goodwill of Cardinals. With a win against UK, Louisville will return to the top 25!

Top ACC Players To Watch For This Week

How Will Jeff Brohm Change Louisville?

Who Will be the Next Coach at the University of Louisville