The Los Angeles Lakers haven’t gotten to the start they wanted to so far this season. The Lakers have a 2-9 record, and things look like they’re not going to get much better. Coming into the season, the Lakers already had a lot of questions about their team. LA looks like the same team from last season through the first quarter mark. Last season they were 33-49 and missed the play-in-tournament. 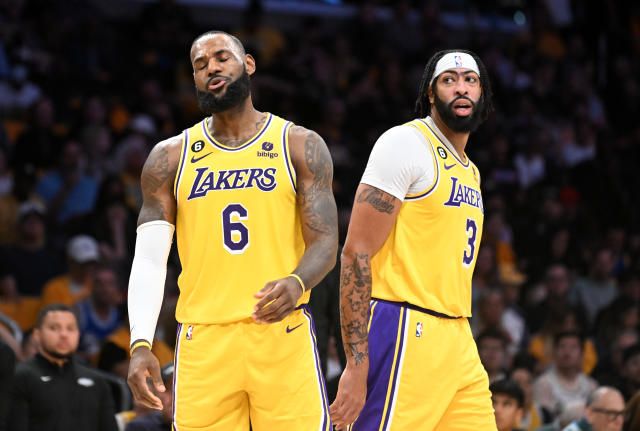 Losing to the Clippers, the Lakers have the second-worst record in the Western Conference. The Houston Rockets are the only worst team. Their season may already be in jeopardy. The Lakers don’t have enough to contend for a championship because of their roster, and the Lakers’ big three is not a good fit. LeBron James is not the same player because of his age, and can’t carry a team anymore. James is battling injuries increasingly each season. Against the Clippers, James left the game with a knee injury.

The Lakers also have Anthony Davis battling injuries. Davis is still a talented player, but his impact is not the same anymore. Russell Westbrook is coming off the bench. He’s embraced his role and brought a lot of energy off the bench for the Lakers. However, Westbrook is still not a natural fit for the Lakers. Westbrook’s playing style and inability to shoot the ball from the perimeter hurt. The Lakers roster has young players trying to make a name. Playing with a player like LeBron, he needs established players who can contribute now.

The Lakers are 28th in the NBA in points per game, averaging 107.7 points. LA is shooting 29.3 percent from three-point range. It’s the worst shooting percentage in the NBA. James is at his best with shooting and athletic perimeter defenders around him; with those ingredients, he’s won championships.

LA should consider trading James and Davis and rebuilding the franchise.
The Lakers would get a massive haul in return. James has earned the right to contend for a championship in year 20. Davis should want a fresh start because his journey with the Lakers had been a failure for the past two seasons because of Davis’s inability to stay healthy. Davis is putting up good numbers, so this value is high. He’s averaging 23.0 points, 10.2 rebounds, and two blocks. Davis can be the missing piece on a championship team. They need to move fast because the season is sinking like the Titanic.

The team is going nowhere no matter what they do this season, so why not tear down the team and have a clean slate? Jeanne Buss needs to be calling some teams and swallow her pride and make the call to trade Lebron James and Anthony Davis.
The Lakers franchise has been unacceptable the past two seasons, and it’s hard to see being a Lakers fan. Jeanne Buss needs to be calling as soon as possible.

What’s Next for Russell Westbrook

What’s Next for the Nets?

The State of the Lakers