Is Odell Beckham Jr a friend or foe? That has been the narrative of Odell Beckham in recent years in Cleveland. He rarely has off-field issues. But on the field, does he help win? Sunday, November 23rd, 2014, Odell Beckham went from a rookie sensation to an NFL superstar. He made a catch that many believe is one of the best in NFL History. That moment made Odell a household name. From his blonde hair to impacting popular culture, he has become the face of a franchise over the QB. After a run with the NY Giants that saw Beckham become possibly the best wide receiver in the sport, the Cleveland Browns traded for him. It seemed like the move to get Beckham was the icing on the cake for the Browns to become a playoff team.

In the 2019 season, there began to be rumors that Odell was unhappy with how the offense used him. The story of the season became the inability to get Odell Beckham more involved. The Browns missed the postseason, and Odell Finished the season with 74 catches, 1035 yards, and 4 TDs. When the 2020 season came around, it looked like Baker Mayfield was forcing the ball on him. Beckham suffered a season-ending injury halfway through the season. The following week the Browns started a run that led them to the playoffs. It included an impressive Wild Card victory against the Steelers. The Browns were then in a dog fight with the previous SuperBowl champions Kansas City Chiefs. It seemed they were better off without OBJ.

This year has been the same old song and dance with Odell and the Browns offense. This time his father got involved posting a video of Baker not getting the football to his son. The last three years of injuries and subpar play caused Odell Beckham Jr to be released. In hindsight, the city of Cleveland never fit the big personality and playing style of Beckham. 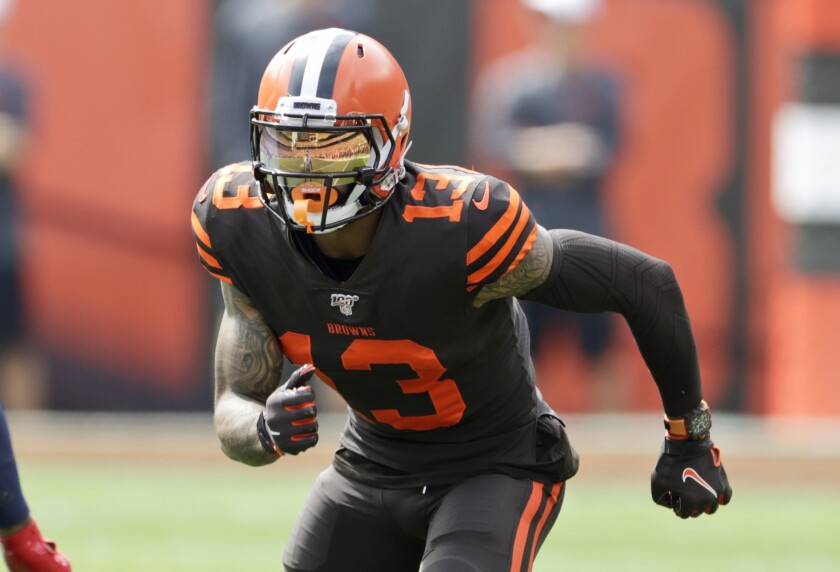 Odell Beckham Jr signed a deal with the Los Angeles Rams. Seven years ago, Odell Beckham Jr wowed the world. Since then, it’s been a roller coaster ride for his career. Is Odell Beckham Jr the shining light on the city of Angels? The Rams were not among the teams initially connected to Beckham. The Chiefs, Packers, Patriots, Saints, and Seahawks were reportedly teams most heavily involved with the wide receiver. In recent years, Los Angeles has gone all in for a Super Bowl. They pushed trades for high-profile players like Jalen Ramsey, Matthew Stafford, and Von Miller from the Broncos.

The signing looked to pair Beckham with Robert Woods, Cooper Kupp, and Van Jefferson. Unfortunately, Robert Woods tore his ACL the same day OBJ officially signed with the Rams. Woods, 29, was off to another solid start with the Rams. Through nine games, Woods had 45 catches for 556 yards and four touchdowns. The Beckham singing went from a luxury to a necessity. Even with the injury, Matt Stafford and Sean Mcvay should stir the ship to the playoffs.

The Top 5 NFL Games For Week 3

Wisconsin versus Northwestern: The Badgers lose to the Wildcats for the...

Is John Calipari Tenure Coming To An End at UK?